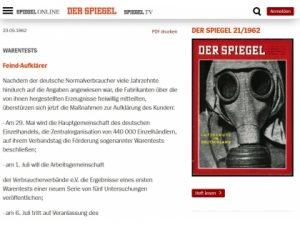 Report by the news magazine “DER SPIEGEL” on May 23, 1962 on the improvement of  consumer policy in West-Germany.

We are conducting research commissioned by the  Federation of German Consumer Organisations on consumer-policy, historical milestones and consumer legislation.

Chair of the Working Association of the Consumer Organisations became the Social democrat and director of the West-German consumer cooperatives, Gustav Dahrendorf (1901-1954).

During the late 1950s and early 1960s regional Consumer Centres (“Verbraucherzentralen”) were founded in each of West Germany’s federal states. 1961 began the testing of products in West Germany. In 1965, a reform of the law gave the consumer organisations the right to prosecute unfair traders in a court of law. The AgV handed over this task to the newly-created Verbraucherschutzverein – Consumer Protection Association – (VSV). To organise education and information campaigns for consumers the AgV created together with Stiftung Warentest the Stiftung Verbraucherinstitut (Consumer Institut Foundation).

After the first years of West-German economy boom consumers got more critical about products, the first product test of 12 washing powders run by the AgV, got a lot of attention. In the following years consumer rights became more and more a part of political interest in German as well as in European politics. One indicator for that development are the establishment of a consumer counsellor at the Ferderal Ministry of Economy in 1972, whose spokesman became AgV-president Prof. Dr. Otto Blume. Another example is the foundation of the Federal Ministry of Food, Agriculture and Consumer protection, in 2001. In addition to product safety, environment protection and ecology as well as data safety, health policy, and legal enforcement became subjects of vzbv activities and work.

By numerous actions, projects and lawsuits consumer rights were and are secured by the Federation of German Consumer Organisationsand Consumer Centres. The milestones of history of consumer policy are researched by Facts & Files.